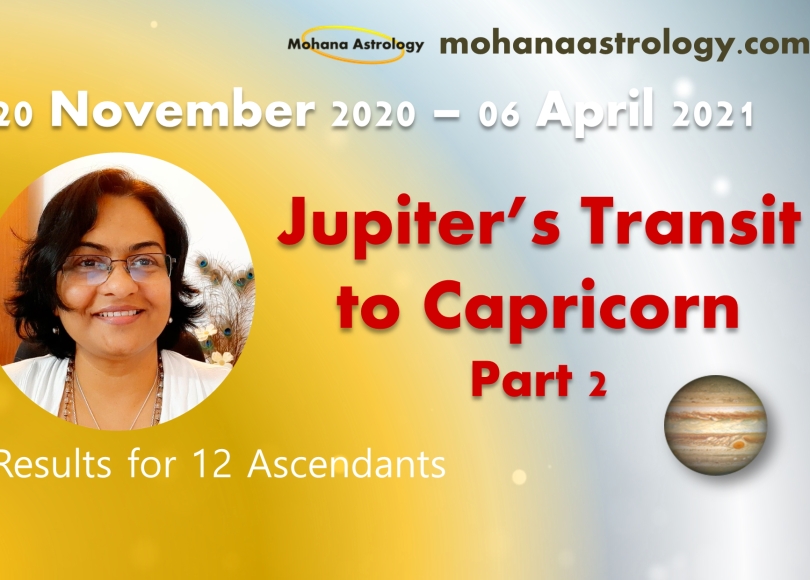 Jupiter is entering Capricorn for the second time on 20 November. Jupiter will be in Capricorn till 06 April 2021. After that it will move to Aquarius. Later on Jupiter will come back to Capricorn in retrograde motion, but I am not discussing the retrograde phase in this article. I shall write about it separately before retrogression happens. This analysis is for the period from 20 November 2020 to 06 April 2021.
Since the lord of Capricorn Saturn is already placed there, we cannot judge Jupiter’s influence in isolation. We have to consider the joint effect to understand the true impact of this transit.

Now, why is Jupiter’s transit in Capricorn and meeting Saturn there such a big deal? It is because this conjunction takes place not very frequently. The last time it happened was in 1961 i.e. 59 years ago. This one transit marks the beginning of a new era, new social system, and new belief system for the entire world.

Know about the Effects of Jupiter’s transit to Capricorn on 12 ascendants on my YouTube channel. Here is the link: https://youtu.be/k2uGnd2d3PQ

In the Kaalpurush chart Jupiter rules the Dharma and the Moksha houses and Saturn rules the Artha and Kaama houses. Therefore Jupiter’s transit to the highest of the Artha house Capricorn which is also the Karma house and meeting Saturn there means the ruler of spiritual values and duties is meeting the ruler of the materialistic values and duties. Both in essence show the duties of our life which will ultimately liberate us from the cycle of birth and rebirth. As per the Vedic texts, the best of the Dharma-Karmadhipati Raj yoga is forming in the natural 10th house. Therefore this transit of Jupiter marks the time for a new beginning, a fresh start for our spiritual values, channelizing our desires in a practical way to create a better world, creating a solid base for both spiritual and Karmic development. One thing to remember is while this once in a lifetime conjunction is taking place, Rahu is also in the earthy Taurus and Ketu is in the turbulent, deep waters of Scorpio. Taurus is the sign of stability and finances and Scorpio is the sign of upheavals, transformation and evolution. Therefore the whole planetary set up is indicating towards great upheavals in the social structure, in the core belief system, in economy and geo-political conflicts all over the world and then emergence of a new world order.

When Jupiter and Saturn met in Capricorn 59 years ago, we did see huge changes in the social system, in family values, in technology and in the core spiritual values. Now on 20 November, the lords of Dharma and Karma are meeting again in the sign of our deeds, Capricorn. It is the time to take a stock of what we did so far and how we can make things better from here.

Jupiter is eternally optimistic, benevolent and does not hesitate to give more. The planet of higher knowledge and spirituality cannot thrive well in the house of rigid worldly duties and karmic oligations. Here the lofty ideas and optimism of Jupiter gets tamed by harsh realities of the Karmic world and hard work and restrictions of Saturn. Therefore it gets weak or debilitated in Capricorn. Although Saturn is there to extend help and cancel the debilitation, Jupiter is able to take Saturn’s help only after it crosses the deepest degree of debilitation, i.e. 5 degree of Capricorn. After crossing the debilitation degree, Jupiter slowly gains strength as it transits through rest of Capricorn. After 22 December Jupiter will slowly start moving ahead of Saturn. Then there will be combustion of Jupiter and a planetary war with Venus till February 2021. The good effects of Neech Bhanga Raj Yoga will be felt after February, not before that. I have added the slides with all relevant dates. Please check and also remember that these dates are as per Indian Standard Time.

Till 24 December Jupiter is going to feel the overwhelming restrictions and obstacles created by Saturn. We need to remember that in Capricorn Jupiter is weak and Saturn is all powered up. In worldly terms this means financial crunches, frustration because of restrictions imposed upon us, inability to execute the ideas, more of hard work and less of rewards. During the initial phase people will not pay heed to the good advises, the economy will be low because of diseases, natural calamities and there may be unrest in people. From end of February it is expected that economy will start doing better, right wisdom and law and order in people’s lives will reinstate, and optimism will come back. Jupiter will also slowly start giving the results of cancellation of debilitation.

The entire time of Jupiter and Saturn’s togetherness in Capricorn is a very spiritual time too. If you are pursuing a spiritual life, put your heart and soul in prayers and meditations, the results will astound you.